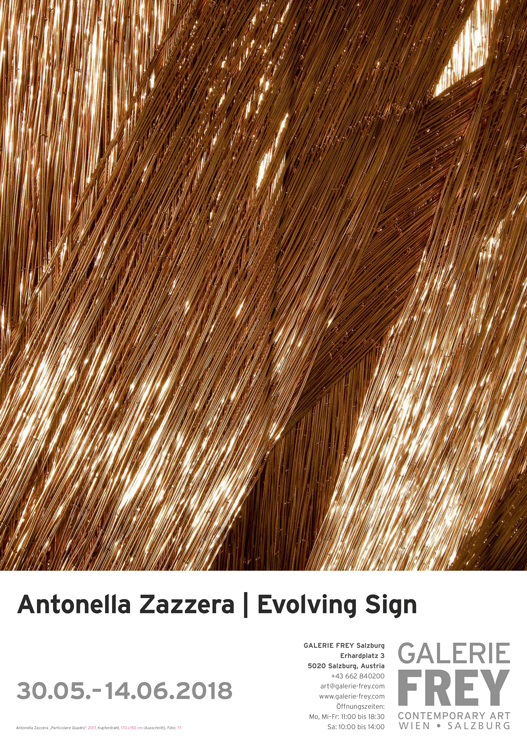 Turning a seemingly ordinary material into something of great value is the stuff of fairy tales. We all remember how Rumpelstiltskin could spin straw into gold. In her current exhibition at the Frey Gallery, the Italian artist Antonella Zazzera treats the observer with a real-life fairy tale as she transforms copper into a golden-like extravaganza. Her works show immaculate sculptures made out of thousands of meters of copper wire carefully spun layer upon layer into a work that transcends space and time. The woven threads, carefully composed, form a pattern that catches and reflects the light. The play with variations of form and the thickness of the wires create sculptures of calm tension that seem to radiate light in a most elegant way. The reflecting of the light is used to define space and form which make her works both sculptures and installations. The “Armonici” series embodies Zazzera’s search for the harmony between space, lines, light and everything that originates from their combination. Inspiration was drawn from the works of both Giacomo Balla and Piero Dorazio and their treatment of light. With her ability to treat the metal as if it were as light as a feather, Zazzera offers a lightness and purity with her individual pieces. Because the sculpture’s dependability of the room it’s in, they continuously change and provide incessantly new impressions from every angle, adjusting to the surrounding’s atmosphere. Zazzera’s works are distinguished by vast contrasts. She transforms sturdy and hard materials into something seemingly soft and pliant. Although thoroughly composed, the sculptures seem to have the inadvertency of nature and through the glow, colour and form they beam with the utmost elegancy giving them a luxurious feel, yet with their ruffled edges they would not look misplaced in agricultural surroundings. This play of opposites give the sculptures an undeniable attraction that pulls the observer in and treats the eye to something so full of excitement and new, yet strangely comforting and familiar. Antonella Zazzera lives and works in Todi where she was born in 1976. She completed her studies with a degree in Painting at the Pietro Vannucci Academy in Perugia. Since 1999, she has assisted Giuliana Soprani Dorazio at the Gallery “Extra Moenia” in Todi. Antonella won first prize for Young Italian Sculpture, the “Premio Giovani Scultura” in the 2005 competition of the San Luca National Academy Institute in Rome, curated by Nicola Carrino, Pietro Cascella, Carlo Lorenzetti. In 2016 she receives the Arnaldo Pomodoro Sculpture Price. Over the years Antonella deepened her knowledge of Italian Art and the recovery of its values: Sign, Light and Space. Her artistic search, which ranges from painting to photography and sculpture, has its foundation in her “traces of a mark,” a visual and tactile archetype which characterizes the physical evidence of the sculptor’s hand in the process of an artwork’s creation. Her current sculptural work is the culmination of Zazzera’s artistic path that began in investigative photography and brought her to an intensive study of the central role of Light in the definition of both Space and Form; the basis of sculpture. The following have shown a continued interest in the work of Zazzera, in both writing and criticism: Giuseppe Appella, Giorgio Bonomi, Carlo Fabrizio Carli, Nicola Carrino, Enrico Castellani, Bruno Ceccobelli, Lara Conte, Fabrizio D’Amico, Ada Masoero, Massimo Mattioli, Carmengloria Morales, Antonia Mulas, Silvia Pegoraro and Federico Sardella. Since the 1990’s, Antonella Zazzera participated in numerous group and solo shows, including: Fondazione Arnaldo Pomodoro, Milano (I); Frederik Meijer Gardens & Sculpture Park, Grand Rapids MI (USA); Mambo Museo d’Arte Moderna, Bologna (I); Galerie Jeanne Bucher Jaeger, Paris (F); 54°Biennale di Venezia, Padiglione Italia/Umbria, Palazzo Collicola, Spoleto (I); Museion Museo d’arte moderna e contemporanea, Bolzano (I); Musma, Museo della Scultura Contemporanea, Matera (I); Centro de Arte Moderna Gerardo Rueda, Matosinhos (P); Bocconi Art Gallery, Milano (I); Camusac, Cassino (I); Antonella Cattani Contemporary Art, Bolzano (I); Fondation Villa Datris, L’Isle sur la Sorgue (F); Galerie Frey, Wien-Salzburg (A); Museo Pino Pascali, Polignano a Mare (I); Galleria Studio G7, Bologna (I); International Convention Center di Shanghai Pu Dong and Wison Art, Shanghai (RC); Jacob Lawrence Gallery, University of Washington, Washington (USA); Cité de la céramique, Sèvres (F); Rain Gallery 798 Art District, Pechino (RC); Museo della Musica, Bologna (I); Galleria Extra Moenia, Todi (I); Pyramida Center for Contemporary Art, Haifa (IL); Grossetti Arte Contemporanea, Milano (I); KCC Gallery, Tokyo (J); Kunsthaus Grenchen, Grenchen (CH); Théatre de Montrouge, Parigi (F); Albornoz Palace Hotel, Spoleto (I); Galeria Winda, Kieleckie Centrum Cultury, Keilce (PL); Galleria Fioretto, Padova (I); Galerjie Media Nox, Maribor (SLO); New York Public Library at the Art Section, New York (USA). Her work is found in both public and private collections.